From Kinshasa to California: This My Story 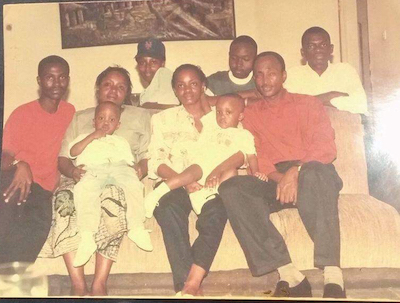 “You’re the man of the house now”, My father said. I didn’t understand the weight of his words then. After all, I was only six years old.

He would flee the country later that night — or week — I’m not sure. It was all a blur, but a moment forever ingrained into my psyche.

Year seven would be an even wilder whirlwind.

Gunshots. Curfews. Explosions. Full-blown war. In just one year, my family went from model Congolese family blissfully star gazing in our backyard, to displaced refugees seeking political asylum in the US.

After my father’s forced departure, the rest of us — a newly single mom and four young boys — sought shelter at a refugee camp in Cameroon. We spent seven months there, with nothing but a large tent as our home and careful rations of rice and beans as our daily meals. The conditions were horrid. I remember the sweltering heat, the woefully unsanitary conditions, the sickness and death. Our future looked bleak, but we had hope. We had prayer. We had grit.

One faithful day, those prayers were answered. Our application was accepted and we would be moving to the United States of America.

We arrived penniless and homeless, but none of that mattered. The land of opportunity was our new home and we had a chance at new life. One way or another, we would make it work.

We’ve done just that — make it work. In early 2016, my mom bought a home. My brothers all graduated from high school and have started college or work. I’ve gone on and graduated from UCLA and started a promising Marketing career in Silicon Valley. I’m eternally grateful.

And surprisingly (to some), I’m eternally grateful for the circumstances that brought me here as well. Though difficult, those experiences taught me valuable lessons about life, the most important being: Life is precious. It is difficult. And it will end. It will bring immense joy and tremendous sorrow. You will bear witness to unspeakable violence (Lord forbid), and you will bear witness to the tremendous generosity of the human spirit. Such is the reality.

But this reality is neither good or bad — it simply is. And this sense of an end, this finiteness, presents us with a question: what will you do with the life you’ve been given? How will you live it? I’ve pondered this question for years. I don’t yet have an exact answer and I don’t know if I ever will, but I do know this:

The experiences and lessons above have compelled me to live life as a communicator determined to do work that captivates, instigates, and *celebrates* the human condition. Cultural provocation is at the core of my being. Legacy and impact, an obsession. If I can help others create meaningful work, and make a good life for themselves, my job here is done. How that’s done is irrelevant — it will evolve as I evolve. That it gets done is imperative.

Mikewamungu.com is my medium for doing the above. It’s an inventory of tools, resources, and musings on cultivating one’s creativity, deepening one’s cultural fluency, and connecting the two to commerce. It’s also a record of my own becoming as a storyteller & person — and an inquiry into what it means to choose yourself and live your best life.

I hope it’s as beneficial to you as it is for me.

—
If you’re ready to choose yourself, create meaningful, provocative work, and make a good life — I invite you to sign up for my newsletter. Let’s be great, together. Let’s celebrate life.